Celebrating the 500th year of the Christian Reformation


For all Christians everywhere. This is not a series of lectures for Mormons; it is directed toward those belonging to historic Christianity. There is no charge, no plate will be passed, and no offering will be requested. No one will try to trap you into joining some sect or other. See the link above for the places in which these talks will be held.

Being a Missionary for the Lord

I have just finished reading a blog post. It is very, very long but the light and knowledge I received from it was very strong, and I feel-very strongly-that I should post a link to it. Please feel free to pass the link along; I'm sure the young man writing the blog would be very willing to edify any and all who can be edified by his post. I would post a synopsis, but the synopsis would be quite long and I could not do justice to what the young man says in his own words.

I'll jump right into my thoughts. Denver Snuffer was baptized on Sept 10, 1973 (Second Comforter: Conversing with the Lord Through the Veil, page 88). 40 years later, to the day, he was excommunicated (see Lecture 1 in Boise, Idaho, of the 10-lecture circuit that stretched from Sept 2013 to Sept 2014).

His ministry began March 1, 1984 (Second Comforter, pages 104, 200-01). Interesting, I think: 1984. The name of a book about total loss of real freedom to act and be. A story about a man who tried to buck the system. I believe his ministry will either end or change 40 years later. On the exact day of March 1st, 2024? I don't have an opinion on that, though I do think it will be in the spring of that year.

And the moon shall turn to blood

When the moon is eclipsed, it looks blood red. No biggie, except there have been several blood moons on or near Jewish holy days, and even an LDS holy day (Saturday General Conference, April 4, 2015). You can read more about the eclipses and the holy days here and here. And here is a list of all the posts on Bare Record that talk about moon and blood, if you care to peruse it.
From the first link:

. . . the fact that these four blood moons will occur on significant Jewish holy days is not only rare, but significant. The first blood moon will be on Passover on April 15, 2014. There will be another blood moon on the following year on Passover which will be April 4, 2015. The other Jewish Holy Day is the Feast of Tabernacles which is  Oct. 8, 2014. On this day as well, there will be a Blood Moon Eclipse.. and then the following Feast of Tabernacle on Sept. 28, 2015 will be the 4th Blood Moon.

The sun shall be turned to darkness

There's something interesting about the full eclipse of the sun (August 21, 2017) that goes from the west coast to the east coast of the continental United States. First, it falls on the birthday of "the venerable leader" of the LDS Church. Second, it is the first stroke of an X. The second stroke will come on April 8, 2024 and will begin in Mexico and end in a tiny bit of Canada, crossing the United States in the process.

As you can see below, it marks a giant X over the continental United States (as an aside, God's handwriting is very artistic. The X is not a straight, austere duet of lines but poetic curves). It's as if God will be saying, "I've had enough of your wickedness, rebellion, and nonsense, dearest Gentiles. I'm done. You are no longer a nation. The Gentiles have proven themselves fruit worthy only to be cast out and burned." I suspect it's all quickly downhill from there for us. 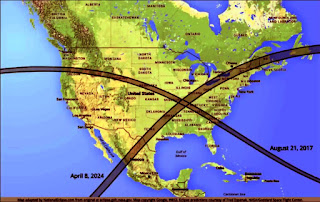 Sidenote: It was made known in a conference in St. George, Utah in March 2017 that God was offering another covenant. People will have the opportunity to accept or reject that covenant on Sept 3, 2017. The words of that covenant were given by the Lord in, if I remember correctly, July 2017, and 7 years from that conference is March 2024. Also, 7 years from verbally accepting or rejecting that covenant is Sept 2024.

Spring 2024.
Denver's 40-year mission is complete. March 1.
The X is complete. April 8.
The covenant is either accepted or rejected by our behavior; the time possibly past, and the country erupts into violence, the like of which has never been seen before. March to Sept.

It will be interesting to see how it all plays out. Maybe, just maybe, this post is not the vain musings of a religious lunatic. I wonder if we should, perhaps, "fear and tremble" and look into our own hearts for pride and rebellion against God, look into our own hearts to see if they are filled with love or with anger/accusation against our fellow beings. Truly, the earth is quickly filling with more violence than it has experienced for a long time. Not too many years from now, I expect, until the whole face of this land is one continual round of murder and bloodshed (see Mormon 8:8) and violence from one end to the other.
Posted by LJn at 3:00 PM No comments:

Teach Your Children to Honor God

These are just some random thoughts I'm having. I don't claim to know what I'm talking about.

Teach your children to honor God. How do you do that if, like me, your kids are grown? What does "honor God" mean anyway?

For example, this latest fiasco in the restorationist movement. A blog post written in haste, accusing Denver, casting aspersions on the new scriptures, raising an alarm about a man no one knows - only to find out that the person writing the blog had her facts wrong. What was wrong with her heart? Nothing? Something? That is only for God to judge. My point in bringing her up is that I, also, have reacted in alarm and anger in my life, saying and doing foolish things that I later regretted, things that did not show charity toward my fellow humans.

Matt Crockett wrote a blog post some time ago, in which he essentially commanded Denver, using God's authority (in vain/erroneously, in my opinion) to be our king. This was because Matt did not know that many of us did not need Denver to be a king, and would resent having one, because we were working with God, even if we listened to and believed every word coming out of Denver's mouth (believing every word is probably not wise, as he is a man and prone to error; I simply used that as an example). I reacted to the post uncharitably. I even emailed Denver, complaining about the post. I was so focused on that part of the post that I did not notice the good things in it.

Here is some insight I have gotten recently (quoted from messages I wrote on Skype to a couple of friends):


I think we each saw different parts. Kind of like the blind men and the elephant. I saw that part and was "offended" that he would command Denver to be my king when I was relishing my freedom from kings, thank you very much! I think I feared that if he was listened to I would be brought back into bondage. I've been in bondage to [exhusband], to the LDS Church, to the school system, to the judicial system, and to the medical system (albeit only when I was young, as far as the medical system goes), and there's no way in hell, on earth, or in heaven I wanted someone to push bondage on me again.

You, having no such issues, saw more expansively. You saw several good things in there that I saw later (after you pointed them out, most likely), but my fear of Matt having the power to force me into bondage to Denver ticked me off, and made me protest.


One of my friends replied:


Yet the bondage would have been of your own choice.


But I couldn't see that. In fact, the insight I'm sharing here in regards to my own feelings was something I couldn't clearly see then. But now, today, I can clearly see that it was all my own issues. The problem was me, and whether or not Matt was out of line really made no difference - because, as you say, I still had a choice though I feared that choice would be taken away from me.