God, Numbers, and His Ten Lectures


I've been studying the ten lectures to see what God would have me learn, do, and be. This part made me wonder what it is God is saying by doing this:

. . . beginning in Boise and going on through Phoenix, the beginning date, the ending date, the content, the fact that there are 10 of them, the timeframe in which they are being delivered, the fact He wanted us to begin on the first day of the 40th year, and He wanted us to end on the last day of the 40th year, those things are not my doing. He is the author of this all.

What this site says about the numeral 40 is this:


The number 40 represents transition or change; the concept of renewal; a new beginning. The number 40 has the power to lift a spiritual state.

It represents a purification (see the link above).

The symbol for us may be that the messenger was purified, meaning we can trust what he says because he is not on his own errand, but that of the Lord's. It is a symbol or witness to us that he may very well have been sent by God. (For me, the message convinces me it is of God. The number only verifies that.)

Also, the change in the LDS Church (and probably other churches that count Joseph Smith Jr as their spiritual father) - a transition away from being led, collectively, by the Lord (though individuals are always able to open heaven, if they repent and believe, and follow Christ).

For those of us who listened to and believed the Lord's words through His messenger, it was the year of renewal and a new beginning for us, lifting us to a spiritual state because our hearts are not hardened, our minds are not blinded, our necks are not stiff. It can represent God's invitation to be purified, to begin anew, to change into what the Lord would like us to be.

In regards to the numeral 10, this site has this to say:


[T]en is one of the perfect numbers, and signifies the perfection of Divine order, commencing, as it does, an altogether new series of numbers.  . . .

Completeness of order, marking the entire round of anything, is, therefore, the ever-present signification of the number ten. It implies that nothing is wanting; that the number and order are perfect; that the whole cycle is complete.

That ought to give us something to ponder on (I have no intention of spelling out all that I've been thinking nor all my conclusions).

1 year. 1 = unity. Also, the first. The Firstborn. All rising up to be firstborn, if they are willing to do, to sacrifice, to be.

See this site - and this one for a little information about the numeral 1.


Age of Enoch when God took him.

Interesting, considering that it is the city of Enoch that we are looking for, after Zion is established.

North to Boise, south to Mesa (Phoenix area), west to Las Vegas (Henderson, actually), and east to Grand Junction. From Idaho to Arizona. From Nevada to Colorado. Thus covering the whole of Utah and most of the pioneer outposts or settlements sent out in Brigham Young's time.

From the Idaho Falls lecture:

(Off our topic, but he also said: "God is moving systematically. He is taking the measure of the Latter-day Saints. His hand is about to move again in the affairs of men. We have a window." I would say that His hand is definitely moving now.)

We could make a whole discussion on how we are all connected and that being the possible reason we are all held accountable. Or we could go at it from the angle of most of us within the parameters of the lectures know about the Book of Mormon and say we believe it is a holy book and valuable to us.

Look at the map (the cities that mark the outside perimeters of the lectures are starred). Draw your own conclusions. They are likely to be just as good or better than mine. 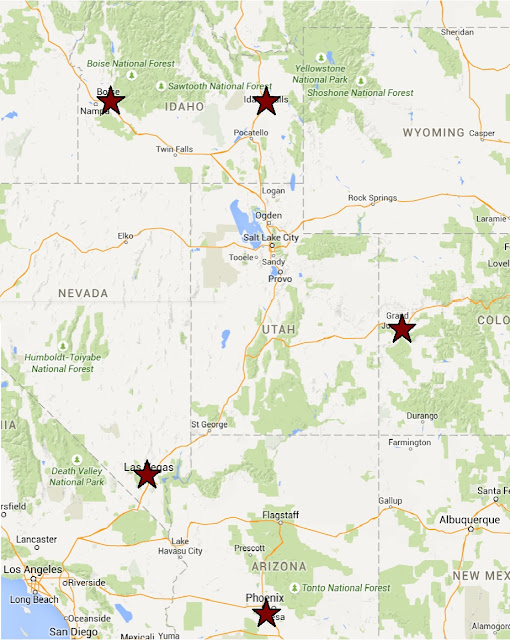